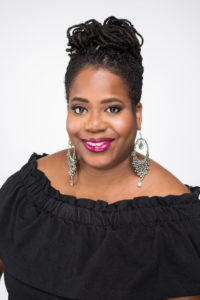 Akiba Solomon is the Senior Editorial Director of Colorlines. She is an NABJ-Award winning journalist from West Philadelphia. Online, she has written about culture and the intersection between gender and race for Ebony, Dissent, Essence and POZ. As Colorlines’ inaugural reporting fellow, Solomon reported on reproductive health access for women of color. Solomon has also been a health editor for Essence, a researcher for Glamour and a senior editor for the print versions of Vibe Vixen and The Source. She is currently co-editing an anthology tentatively titled “How We Fight White Supremacy: A Field Guide to Black Resistance” to be published by Nation Books in 2019. Solomon was the coeditor “Naked: Black Women Bare All About Their Skin, Hair, Lips, Hips and Other Parts.”As a panelist, she has spoken about women’s and social justice issues at a range of institutions including The Schomburg Center for the Research in Black Culture, Stanford University, Yale University and Harvard University.   TOPICS: Writing, Women and Girls of Color, Media
Book This Speaker

On The Ground: These Women Are On The Front Lines Combating Sexual Assault

‘Heavy’ Author Kiese Laymon Is Not Here to Titillate You

Akiba Solomon Is A Writing Ass Chick We Love