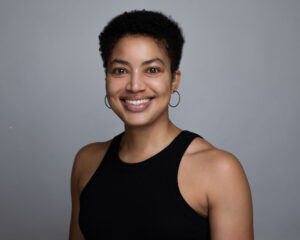 Alaina E. Roberts is a born and bred Californian whose Oklahoma roots have shaped her life and research: her father’s ancestors were Black and mixed-race people who survived Indian Removal’s Trail of Tears and were owned as slaves by Chickasaw and Choctaw Indians.

Dr. Roberts is currently an Assistant Professor of History at the University of Pittsburgh where her work revolves around illuminating the many intersections of Native American and Black life from the 1400s to the modern day. To this end, she has written op-eds for TIME magazine, the Washington Post, and High Country News, and she has been featured by CNN, The Atlantic, the Boston Globe, USA Today, and more.
Dr. Roberts’s first book, I’ve Been Here All the While: Black Freedom on Native Land, asks its readers to rethink what they know about slavery, emancipation, the Civil War, and Reconstruction. With a focus on a part of the African Diaspora most don’t know existed–people of African descent owned by Native Americans, living in what is today the state of Oklahoma–she crafts a narrative that paints a picture of what it means to live a life as a slave in an Indian nation, to see your Indian slaveholders fight for the Confederacy, to be emancipated by treaty rather than constitutional amendment, and to receive 40 acres of land as reparations for generations of exploitation.
I’ve Been Here All the While was a finalist for the Los Angeles Times Book Prize in history and winner of the Stubbendieck Great Plains Distinguished Book Prize from the Center for Great Plains Studies at the University of Nebraska.
Dr. Roberts is interested in using her family history and the history of relations between Black and Native American people to persuade her audiences that unity and strength in diversity are possible. She also enjoys speaking about Black cowboys and the Civil War in the West, Juneteenth and emancipation across North America, and Native American history broadly defined.

Democratic Candidates are finally talking about domestic terrorism. Here’s why that matters.

The ways Afro-Indigenous people are asked to navigate their communitie