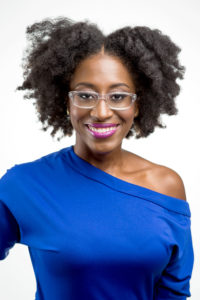 Kenrya Rankin is an award-winning author, journalist, editorial consultant, speaker and on-air talent whose insight has been tapped by leading outlets, including The New York Times, The Huffington Post and ThinkProgress. From books to news analysis to breastfeeding primers, she creates dynamic content that amplifies the lived experiences, advocacy and work of people of color and shifts the narrative around who deserves liberation, justice and dignity in America.

Raised by a Black nationalist father in Cleveland, Ohio, Kenrya learned early how White supremacy and its attendant -isms impact the lives of those pushed to the margins, including people of color, women and femmes, folks living with disabilities and members of the LGBTQIA+ community. She currently serves as editorial director at Colorlines, where her activist self shines through via work that centers POC and reimagines what it looks like to engage them in a way that doesn’t require begging for their humanity.

As a journalist and editor, her work has appeared in dozens of national publications—including Fast Company, Ebony and Glamour—and has been translated into 21 languages. She writes about everything from literature to technology, but her heart lies with racial justice, identity and parenting. So it’s fitting that she is the founder and editorial director of parenting site BlackAndGreenMama.com and is a practicing birth and postpartum doula at Mama’s Intuition Doula + Lactation Services.

A 20-year veteran in the editorial space, she has run a successful consultancy for a decade and previously served on staff at Reader’s Digest, Latina, Uptown Magazine and as a contributing editor at ShopSmart. She has published four books, including Bet on Black: African-American Women Celebrate Fatherhood in the Age of Barack Obama. Her upcoming title—How We Fight White Supremacy: A Field Guide to Black Resistance [https://www.hachettebookgroup.com/titles/akiba-solomon/how-we-fight-white-supremacy/9781568588506/?utm_source=PinT] (Nation Books, March 26, 2019), coauthored with Akiba Solomon—documents the work of Black people inching the nation closer to justice both in and outside the spotlight, and asks readers to join the battle to make our collective freedom dream lucid.

Kenrya earned her undergraduate degree in journalism from Howard University and her master’s degree in publishing from New York University. She is a proud native of Cleveland, Ohio, and currently lives in the Washington, D.C. area with her brilliant artist daughter.