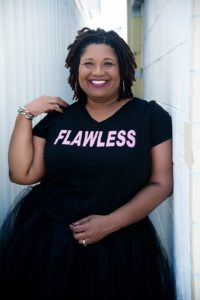 Tamara Winfrey-Harris is a writer who specializes in the ever-evolving space where current events, politics and pop culture intersect with race and gender. She says, “I want to be a storyteller of the black female experience and a truth-teller to all those folks who got us twisted—tangled up in racist and sexist lies. I want my writing to advocate for my sisters. We are better than alright. We are amazing.”

Well-versed on a range of topics, including Beyoncé’s feminism; Rachel Dolezal’s white privilege; and the black church and female sexuality, Tamara has been published in media outlets, including The New York Times, Cosmopolitan, New York, Ebony, The American Prospect and Ms. She pens a regular column, “Some of Us Are Brave,” for Bitch magazine. Her work, including “No Disrespect: Black Women and the Burden of Respectability,” which first appeared in Bitch magazine, has been republished in textbooks, including The Arlington Reader (Bedford/St. Martin’s 2013).

Tamara has also been called to share her analysis on media outlets, including NPR’s “Weekend Edition” and Janet Mock’s “So Popular” on MSNBC.com, as well as university campuses nationwide, including Princeton University, Purdue University and The Ohio State University.

Tamara’s first book, The Sisters Are Alright: Changing the Broken Narrative of Black Women in America was published in 2015 by Berrett-Koehler Publishers. Called “a myth-busting portrait of black women in America,” by The Washington Post, the book won the Phyllis Wheatley Award, IndieFab Award, Independent Publishers Living Now Award and the IPPY Award.

A Midwesterner at heart, Tamara is a native of Gary, IN. She graduated with a BA degree from the Greenlee School of Journalism at Iowa State University.