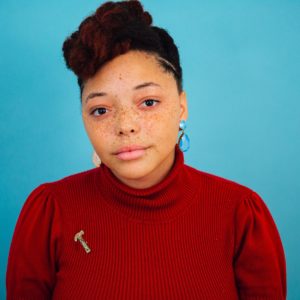 Brea Baker is a queer black millennial activist working at the intersections of race, gender identity, public safety, and community. Currently serving as Director of Programs at Inspire Justice, Brea connects influencers and industry leaders to activism in authentic, meaningful, and sustainable ways. Working across fields from activism to the entertainment industry to electoral work to politics, she believes in the need for progressive policy along with a culture that reflects and affirms everyone’s right to thrive.

Brea is a skilled communications strategist, influencer engagement professional, activist/organizer, and social impact advisor who has a B.A. in Political Science from Yale University. She has contributed to dozens of electoral and advocacy campaigns including the 2017 Women’s March (where she served as the youngest national organizer), the campaign to #FreeMeekMill, the 2018 student walkouts against gun violence, Jumaane Williams’ successful bid for NYC Public Advocate, and more.

For her work in coalition with other activists and organizers, Brea has been recognized as a 2017 Glamour Woman of the Year (Women’s March) and has spoken on her activism and work at Yale University, Yale Law School, the United Nations’ Girl Up, ABC’s The View, ELLE Magazine, VICE, Man Repeller, International Youth 2 Youth Summit, and more. In addition to this, Brea advises organizations, companies, and individuals on youth engagement, communications strategy, and improving diversity and inclusion. She serves as Executive Advisor to Women’s March Youth Empower and is an active member of Justice League NYC.

Lessons From The Daughters Of The Civil Rights Movement

Women Of Color Are Right To Be Jaded About Voting. But That Doesn’t Mean We Should Stop Doing It.