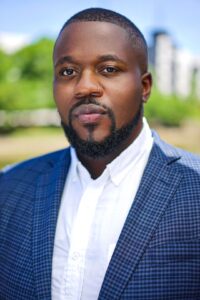 Dr. Ahmad Greene-Hayes is one of the most exciting scholars amongst a dynamic new generation of scholars of African American Religious Studies. A social historian and critical theorist, Greene-Hayes’s research interests include critical Black Studies, Black Atlantic Religions in the Americas, and race, queerness, and sexuality in the context of African American and Caribbean religious histories.

Dr. Greene-Hayes is currently working on a book manuscript entitled, Underworld Work: Black Atlantic Religion-Making in Jim Crow New Orleans, which is under advance contract with the University of Chicago Press in the Class 200: New Studies in Religion series. His book examines the Black Atlantic religious cultures and sexual politics that emerged in New Orleans—a vibrant, American port city—amidst Jim Crow policing and the migration of African Americans, West Indians, and Central Americans to the region in the late nineteenth and early twentieth centuries.

Dr. Greene-Hayes is the past recipient of numerous fellowships and awards from the Ford Foundation, the American Academy of Religion, the Mellon Mays Foundation, the Political Theology Network, the Social Science Research Council, and many more. During the 2017-2018 academic year, he held the prestigious LGBT Studies Research Fellowship at Yale University, and in 2020, he was awarded the American Society of Church History Research Fellowship. During the 2022-2023 academic year, he is a Research Fellow of “The Crossroads Project: Black Religious Histories, Communities, and Cultures,” funded by the Henry Luce Foundation and housed at Princeton University.

Dr. Greene-Hayes is a steering committee member for both the Afro-American Religious History Unit and the Religion and Sexuality Unit at the American Academy of Religion, and he is also an advisory board member for the LGBTQ Religious Archives Network. In conversation with his research, he has consulted and collaborated with the Center on African American Religion, Sexual Politics and Social Justice at Columbia University, the African American Policy Forum, Black Women’s Blueprint, and a host of other nonprofit organizations, churches, and other community institutions.

In addition, Dr. Greene-Hayes is at work on two additional book projects. The first is an intellectual history of the founding of the field of Black Religious Studies in the midcentury up to its present-day iterations, and the second is a survey of the history of sex, sexualities, and sexual ethics in Black Atlantic religions from the era of enslavement to the emergence of sexually transgressive practices in early twentieth century new religious movements. With the contested religions of Black people in central view by way of a rigorous process of archival theorization, Dr. Greene-Hayes’ research agenda in the field of Black Studies and Religious Studies ultimately posits that Black people contrive and plot sacred geographical maps for racial, sexual, and religious meaning and often in refusal to overarching systems of domination.