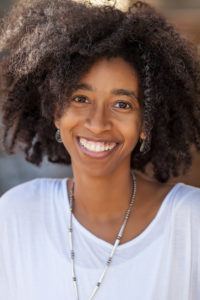 Alexis Pauline Gumbs is a Queer Black Troublemaker and Black Feminist Love Evangelist and an aspirational cousin to all sentient beings. Her work in this lifetime is to facilitate infinite, unstoppable ancestral love in practice. Her poetic work in response to the needs of her cherished communities have held space for multitudes in mourning and movement. Alexis’s co-edited volume of Revolutionary Mothering: Love on the Front Lines (PM Press, 2016) has shifted the conversation on mothering, parenting and queer transformation. Alexis has transformed the scope of intellectual, creative and oracular writing with her triptych of experimental works published by Duke University Press (Spill: Scenes of Black Feminist Fugitivity in 2016, M Archive: After the End of the World in 2018 and Dub: Finding Ceremony forthcoming in 2020.) Unlike most academic texts, Alexis’s work has inspired artists across form to create dance works, installation work, paintings, processionals, divination practices, operas, quilts and more.

Alexis is the founder of Brilliance Remastered, an online network and series of retreats and online intensives serving community accountable intellectuals and artists in the legacies of Audre Lorde’s profound statement in “The Master’s Tools Will Never Dismantle the Master’s House” that the preceding statement is “only threatening to those…who still think of the master’s house as their only source of support.” Through retreats on ancestor accountable intellectual practice, and online courses on topics from anger as a resource to transnational intellectual solidarity Alexis and her Brilliance Remastered collaborators have nurtured a community of thinkers and artists grounded in the resources that normative institutions ignore.

All of Alexis’s work is grounded in a community building ethic and would not be possible without her communities of accountability in Durham, NC the broader US Southeast and the global south. As a co-founder member of UBUNTU A Women of Color Survivor-Led Coalition to End Gendered Violence, Warrior Healers Organizing Trust and Earthseed Land Collective in Durham, NC, a member of the first visioning council of Kindred Southern Healing Justice Network and a participant in Southerners on New Ground, Allied Media Projects, Black Women’s Blueprint and the International Black Youth Summit for more than a decade she brings a passion for the issues that impact oppressed communities and an intimate knowledge of the resilience of movements led by Black, indigenous, working class women and queer people of color. Her writing in key movement periodicals such as Make/Shift, Left Turn, The Abolitionist, Ms. Magazine, and the collections Abolition Now, The Revolution Starts at Home, Dear Sister and the Transformative Justice Reader have offered clarity and inspiration to generations of activists.

Alexis work with her primary collaborator Sangodare has shown the world a Queer Black Feminist Love Ethic in practice. Over the past 11 years they have nurtured the Mobile Homecoming Project, an experiential archive amplifying generations of Black LGBTQ Brilliance which has consisted of listening tour of the United States (in a 1988 Winnebago!) 7 intergenerational retreats and pilgrimages in the Southeast US, a media and audio archive of many Black Feminist LGBTQ elders and is now in the land stewardship phase of building a living library and archive that serves as an all ages independent and assisted living community of intergenerational learning and love. Sangodare and Alexis are also the co-founders of Black Feminist Film School, an initiative to screen, study and produce films with a Black feminist ethic. Sangodare and Alexis have also collaborated on the exhibition Breathing Back at the Carrack Gallery in Durham, NC and more than 50 visits to campuses, organizations and conferences in the United States.

Alexis was honored by the Anguilla Literary Festival as “The Pride of Anguilla,” a small country where her grandparents Jeremiah and Lydia Gumbs played key roles in the 1967 revolution. She identifies proudly as a queer Caribbean author and scholar in the tradition of Audre Lorde, June Jordan, M. Nourbese Phillip, M. Jacqui Alexander, Dionne Brand and many more. She was the first scholar to research in the papers of Audre Lorde at Spelman College, June Jordan at Harvard University and Lucille Clifton at Emory University during her research for her PhD in English, African and African American Studies and Women and Gender Studies from Duke University. She is published in dozens of edited collections and academic journals on topics ranging from black coding practices to queer caribbean poetics, to mothering in hip hop culture. She speaks as a Black feminist expert in a number of films including Alice Walker: Beauty in Truth by Pratibha Parmar.

Alexis’s poetry and fiction appears in many creative journals and has been honored with inclusion in Best American Experimental Writing, a Pushcart Prize nomination, and honors from the Lucille Clifton Poetry Prize and the Firefly Ridge Women of Color Award. She has been poet-in-residence at Make/Shift Magazine and is currently Creative Writing Editor at Feminist Studies.

Alexis’s work as a media maker and her curricula for participatory digital education have been activated in 143 countries. Her digital distribution initiative BrokenBeautiful Press, her work as co-founder of Quirky Black Girls and her loving participation in the Women of Color Bloggers Network in the early 2000’s established her as one of the forerunners of the social media life of feminist critical and creative practice. Alexis has been honored with many awards from her communities of practice including being lifted up on lists such as UTNE Readers 50 Visionaries Transforming the World, The Advocate’s 40 under 40, Go Magazines 100 Women We Love, the Bitch 50 List, ColorLines 10 LGBTQ Leaders Transforming the South, Reproductive Justice Reality Check’s Sheroes and more. She is a proud recipient of the Too Sexy for 501C-3 trophy, a Black Women’s Blueprint Visionary Award and the Barnard College Outstanding Young Alumna Award.

Over the past two years, Alexis served as visiting Winton Chair at University of Minnesota where she collaborated with Black feminist artists in the legacy of Laurie Carlos to create collaborative performances based on her books Spill and M Archive. During that time she served as dramaturg for the award winning world premiere of Sharon Bridgforth’s Dat Black Mermaid Man Lady directed by Ebony Noelle Golden. Alexis is currently at work on multiple manuscripts including: Visionary Daughtering, an interactive anthology following up on Revolutionary Mothering and inspired by the example of Kakuya Shakur; The School of Our Lorde, a collection of her many essays and curricula based on the life and legacy of Audre Lorde; Breathing Guide for Marine Mammals in Training, a series of meditations based on the increasingly relevant lessons of marine mammals in a world with a rising ocean levels; and Go There, a poetic engagement with the archive of Black feminist transnational practice spearheaded by Cheryl Y. Greene and Alexis De Veaux at Essence Magazine from the 1970-90s.