not accepting invitations September 2023 through June 2024 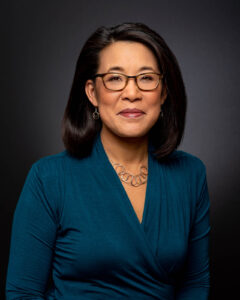 One of the nation’s leading immigration and Asian American historians, Erika Lee teaches American history at the University of Minnesota, where she is a Regents Professor and Director of the Immigration History Research Center. The granddaughter of Chinese immigrants, Lee was recently elected to the American Academy of Arts & Sciences and testified before Congress in its historic hearings on anti-Asian discrimination and violence. She is an active public intellectual, serves as the President-Elect of the Organization of American Historians, and is the author of four award-winning books including The Making of Asian America: A History. Called “sweeping,” “comprehensive,” and “fascinating” by the New York Times and a “long overdue stirring chronicle” by the LA Times, The Making of Asian America was the recipient of the Asian Pacific American Award for Literature from the American Library Association, an “Editor’s Choice” by the New York Times, and was named to the Best Nonfiction Books list by Kirkus Reviews. A new version is now out with a postscript about anti-Asian racism and Asian American activism during the COVID-19 pandemic Lee’s newest book is America for Americans: A History of Xenophobia in the United States (Basic Books.) Called “unflinching and powerful” by Carol Anderson (author of White Rage) and “essential reading” by Ibram X. Kendi (author of How to Be an Antiracist), America for Americans won the American Book Award and the Asian/Pacific American Award for Literature. Named to best books lists by Time, USA Today, and Ms. Magazine, it was highlighted by the Washington Post, the New York Times, and the New York Public Library as one of the most important books illuminating the Trump era and informing essential issues in the 2020 election. It is now out in paperback with a new epilogue on xenophobia during the COVID-19 pandemic. Lee regularly appears in the media, including featured appearances in PBS’s “Asian Americans” and “The Chinese Exclusion Act,” in the History Channel’s “America: The Promised Land,” and Bill Moyer’s “Chinese in America.” She has been interviewed by CNN, the Washington Post, the New York Times, PBS NewsHour, National Public Radio, Weekend Edition, the BBC, ABC News, NBC News, the Guardian, and the Los Angeles Times.