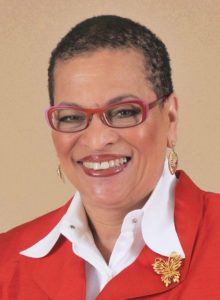 Dr. Malveaux has long been recognized for her progressive and insightful observations. She is a labor economist, noted author, and colorful commentator. Julianne Malveaux has been described by Dr. Cornel West as “the most iconoclastic public intellectual in the country.” Her contributions to the public dialogue on issues such as race, culture, gender, and their economic impacts are shaping public opinion in 21st century America.

Dr. Malveaux’s popular writing has appeared in USA Today, Black Issues in Higher Education, Ms. Magazine, Essence Magazine, and the Progressive. Her weekly columns appeared for more than a decade (1990-2003) in newspapers across the country including the Los Angeles Times, Charlotte Observer, New Orleans Tribune, Detroit Free Press, and San Francisco Examiner. She has hosted television and radio programs, and appeared widely as a commentator on networks, including CNN, BET, PBS, NBC, ABC, Fox News, MSNBC, CNBC, C-SPAN and others.

Dr. Julianne Malveaux has been a contributor to academic life since receiving her Ph.D. in economics from MIT in 1980. She has been on the faculty or visiting faculty of the New School for Social Research, San Francisco State University, the University of California (Berkeley), College of Notre Dame (San Mateo, California), Michigan State University and Howard University. She holds honorary degrees from Sojourner Douglas College (Baltimore, Maryland), Marygrove College (Detroit, Michigan), University of the District of Columbia, and Benedict College (Columbia, South Carolina). She received her bachelor’s and master’s degrees in economics at Boston College.

During her time as the15th President of Bennett College for Women, Dr. Julianne Malveaux was the architect of exciting and innovative transformation at America’s oldest historically black college for women. Under her leadership, the administration identified four key focus areas: women’s leadership, entrepreneurship, excellence in communications, and global awareness. In the five short years of her presidency, Bennett College successfully received a 10-year reaffirmation of its accreditation from the Southern Association of Colleges and Schools, markedly improved existing facilities, embarked on a $21 million capital improvements program – which marked the first major campus construction in more than 25 years – and in fall 2009 enjoyed an historic enrollment high.

Currently, Dr. Malveaux is the Honorary Co-Chair of the Social Action Commission of Delta Sigma Theta Sorority, Incorporated and serves on the boards of the Economic Policy Institute as well as The Recreation Wish List Committee of Washington, DC. A native San Franciscan, she is the President and owner of Economic Education a 501 c-3 non-profit headquartered in Washington, D.C.

We Must Not Normalize Poverty And Inequity

IN THE WAKE OF HURRICANE DORIAN: CLIMATE CHANGE AND INFRASTRUCTURE ISSUES