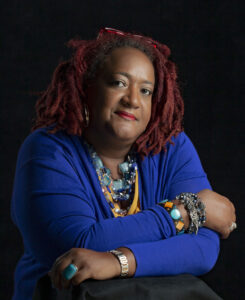 Dr. Psyche Williams-Forson is Professor and Chair of the Department of American Studies at the University of Maryland College Park. She is an affiliate faculty member of the Theatre, Dance, and Performing Studies, the Departments of African American Studies, Anthropology, The Harriet Tubman Department of Women, Gender, and Sexuality Studies, and the Consortium on Race, Gender, and Ethnicity. Dr. Williams-Forson is the author of Eating While Black: Food Shaming and Race in America (UNC Press 2022); Taking Food Public: Redefining Food in a Changing World, a co-edited collection w/Carole Counihan, (Routledge 2013); and, the award-winning Building Houses out of Chicken Legs: Black Women, Food, and Power (UNC Press 2006). She is known nationally and internationally for her pioneering work in building the scholarly subfield of Black food studies and has published articles numerous on this aspect of the material lives of African Americans in the United States from the late 19th century to the present. This includes topics like Black women, food, and power; food and literature; food and sustainability; race, food, and design thinking; eating and workplace cultures; as well as the historical legacies of race and gender (mis)representation, with (and without) food, and more. She has also been interviewed on several podcasts, NPR, Radio New Zealand, the Associated Press, the Washington Post, Huff Post, the New York Times, among others. She has also been featured in documentaries such as: Netflix’s Ugly Delicious; and,The Invisible Vegan.

‘White People Food’ Is Creating An Unattainable Picture Of Health