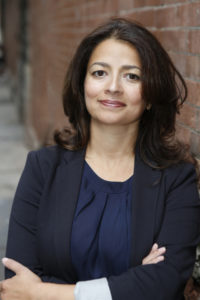 SAYU BHOJWANI is a political scientist, author and outspoken advocate for shaking up the status quo in our democracy. In 2019, CQ Roll Call named her one of three people outside of the Beltway to watch. Since 2010, she has served as the founder and president of New American Leaders. In that capacity, she has recruited, coached and supported over 50 first and second generation Americans who now serve in local, state or federal office. A proven expert on diversity and democracy, she gave a widely viewed TED talk on immigrants’ critical role in our democracy. In 2018, her first book, People Like Us: The New Wave of Candidates Knocking at Democracy’s Door, was published by The
New Press.

Sayu has a PhD in Politics and Education, an M.Ed. in Comparative Education, and an M.A. in English Education, all from Teachers College, Columbia University. She received a B.A. in English from the University of Miami and is the recipient of numerous awards including the New York Immigration Coalition Community Champion Award, the Case Foundation Fearless Changemaker Award and the Girl Be Heard Fairy Godmother Award. She serves on the Commission on the Practice of Democratic Citizenship, convened by the American Academy of Arts and Sciences and on the board of Haven.

Sayu came to the United States as an international student and became a naturalized citizen after a long and bureaucratic journey through the immigration system. A proud New Yorker, she also served as New York City’s first Commissioner of Immigrant Affairs from 2002 to 2004.

The outsiders: Roll Call’s people to watch in 2019

As immigrants, we love America and still want it to be better