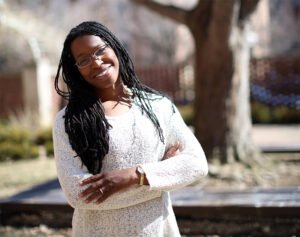 Tiya Miles is the author of four prize-winning books in the history of American slavery, including: All That She Carried: The Journey of Ashley’s Sack, a Black Family Keepsake, which won the 2021 National Book Award for Non-Fiction, and The Dawn of Detroit: A Chronicle of Slavery and Freedom in the City of the Straits, which won an American Book Award, a Frederick Douglass Prize, and four other historical and non-fiction prizes in 2018. She has also published The Cherokee Rose: A Novel of Gardens and Ghosts, a 2016 Lambda Literary Award finalist in fiction, a lecture series on haunted plantations of the South, and various academic articles as well as essays in The New York Times, The Boston Globe, The Atlantic, and more. She was a 2011 MacArthur Foundation “Genius Grant” Fellow, a Mellon Foundation New Directions Fellow, and a National Endowment for the Humanities Public Scholars Award recipient. Miles is currently a Professor of History and Radcliffe Alumnae Professor at Harvard University, where she directs the Charles Warren Center for Studies in American History. She speaks on African American, Native American, and abolitionist women’s history; on race and the environment; on the American West and Midwest; on public history and humanities; and on motherhood and feminism.